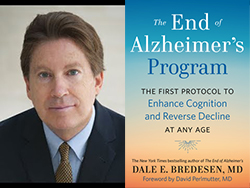 Steven Masley, MD, is a physician, nutritionist, author, speaker and award-winning patient educator. He is a Fellow of the American Heart Association, American College of Nutrition, and American Academy of Family Physicians. Dr. Masley is a clinical associate professor at the University of South Florida and teaches programs at Eckerd College. He sees patients from across North America at the Masley Optimal Health Center in St. Petersburg, FL, and has published numerous scientific articles, as well as several books: SMART FAT, The 30-Day Heart Tune-Up, and Ten Years Younger. He has devoted his medical career to the study of heart disease and aging, working to empower people to achieve optimal health through comprehensive medical assessments and lifestyle changes.

Dale Bredesen, MD, is internationally recognized as an expert in the mechanisms of neurodegenerative conditions such as Alzheimer’s disease. He graduated from Caltech, then earned his M.D. from Duke University Medical Center in Durham, North Carolina. He served as chief resident in neurology at the University of California, San Francisco (UCSF) before joining Nobel laureate Stanley Prusiner’s laboratory at UCSF as an NIH postdoctoral fellow. He has held faculty positions at UCSF, UCLA, and the University of California, San Diego. Dr. Bredesen directed the Program on Aging at the Burnham Institute before becoming the founding president and CEO of the Buck Institute in 1998. He is the chief medical officer of MPI Cognition. In the spring of 2017, he will star in a documentary which follows patients on his protocol.

Dr. Pavel Klein, MD, is the founder and director of the Mid-Atlantic Epilepsy and Sleep Center in Bethesda, MD. He is a former instructor at Harvard and Georgetown Universities and developer of a meal program designed to prevent, and treat, type 2 diabetes. Dr. Klein’s clinical research includes novel treatments of epilepsy, dietary treatments of epilepsy in adults, prevention of epilepsy after traumatic brain injury, the effect of sex and stress hormones on epilepsy, and women with epilepsy. Dr. Klein has published more than 30 peer-reviewed articles and contributed chapters to several books on epilepsy.

Valerie Estess, along with her sisters Jenifer and Meredith, founded Project A.L.S., which has revolutionized the way that science and medicine approach disease research. As Director of Research, Valerie motivates world leading scientists and clinicians to work aggressively, openly, and together toward a deeper understanding of ALS, and closely related Alzheimer’s, Parkinson’s, and spinal cord injuries. In 6 years, Project A.L.S. has raised over $23 million for research. With her sister Jenifer, Valerie Estess authored the national bestseller Tales from the Bed. Jenifer Estess, a New York theater and film producer, was diagnosed with ALS (Lou Gehrig’s disease) and passed away in 2003.

Dr. Kevin Passero and his special guest Dr. Joe Pizzorno will be discussing the truth behind gluten and how to power up your mitochondria.

Dr. Joseph E. Pizzorno, ND, is one of the world’s leading authorities on science-based natural medicine. A physician, educator, researcher and expert spokesperson, Dr. Pizzorno is founding president of Bastyr University, America’s largest and most successful accredited institution of natural medicine. Licensed as a naturopathic physician in Washington State since 1975, he has been the recipient of numerous awards and honors for his academic, professional and public affairs leadership. Dr. Pizzorno is the author of Total Wellness and co-author of the internationally acclaimed physician’s reference Textbook of Natural Medicine. Among his many affiliations, Dr. Pizzorno serves as a board member for the Institute for Functional Medicine and is a contributor to developing the Functional Medicine model.