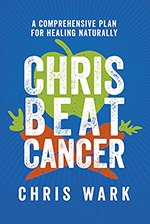 Special guest: Chris Wark is a bestselling author, speaker and global health and wellness leader. He was diagnosed with stage III colon cancer in 2003, when he was 26 years old. After surgery, he opted out of chemotherapy and used plant-based nutrition and natural non-toxic therapies to heal. Chris began sharing his story in 2010 with a mission to inspire people to take control of their health, and to show them that simple diet and lifestyle changes can have a huge impact on cancer prevention and survival. His national bestselling book, Chris Beat Cancer: A Comprehensive Plan for Healing Naturally, was published by Hay House in September 2018.

Special guest: Dr. Rob Brown, MD, began his formal medical education at the University of Miami School of Medicine, followed by a residency in diagnostic radiology in Pittsburgh and a fellowship at the University of California, San Diego, in musculoskeletal radiology. As a diagnostic radiologist, Dr. Brown has worked both in private practice as well as at academic centers, including NYU Medical Center and the Cleveland Clinic Foundation. Dr. Brown’s varied life experiences, including surviving a diagnosis of cancer, have brought him to the understanding that wellness is optimally achieved by allowing the body to heal, rather than by manipulating it through medication and procedures. Dr. Brown enjoys helping people create healthier lifestyle choices and believes in the importance of removing toxicity, particularly from the home environment.

Michael A. Klaper, MD, graduated from the University of Illinois College of Medicine in Chicago and received post-graduate training in internal medicine, surgery, anesthesiology and orthopedics at the University of British Columbia hospitals in Vancouver and obstetrics at the University of California, San Francisco. As Dr. Klaper’s medical career progressed, he began to realize that many of the diseases his patients brought to his office were made worse, or actually caused, by the high-fat, high sugar, overly processed Standard American Diet (S.A.D.). He currently practices nutritionally-based medicine at True North Health Center in Santa Rosa, California.

Dr. Joe Tatta is a doctor of physical therapy, board certified nutrition specialist and functional medicine practitioner who specializes in treating persistent pain and lifestyle-related musculoskeletal, metabolic and autoimmune health issues. He is the host of The Healing Pain Podcast, designed to broaden the conversation around natural strategies for solving persistent pain. Dr. Tatta is the author of Heal Your Pain Now: The Revolutionary Program to Reset Your Brain and Body for a Pain-Free Life. He is currently in private practice and also provides online health consulting to help people achieve a pain-free life and heal from chronic disease.