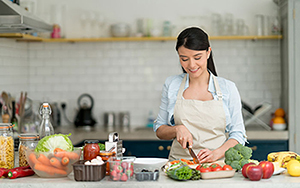 Special guest: Aminah Keats, ND, FABNO, is board certified in naturopathic oncology and has specialized in integrative oncology since 2004. Dr. Keats received her naturopathic doctorate from the University of Bridgeport College of Naturopathic Medicine. She completed her undergraduate degree in psychology from Spelman College and did pre-medical coursework at Rutgers University. Her goal with each patient is to create a personalized treatment plan that safely works to reduce side effects, support immune function and offer a cancer-fighting benefit to patients who are actively undergoing conventional oncology treatment. Dr. Keats also works with patients who are at high risk for cancer and those seeking naturopathic care for cancer prevention. She utilizes vitamin and nutrient therapy, botanical medicine, and diet and lifestyle counseling to create individualized plans for her patients. She currently works in private practice at Capital Integrative Health in Bethesda, MD.

Dr. Laurie L. Herscher, M.D., is a nationally recognized radiation oncologist. She has practiced in the Washington, D.C., area for more than 20 years. She is board certified in Integrative Medicine and completed her fellow training at the prestigious University of Arizona Center for Integrative Medicine under the guidance of the field’s pioneer, Dr. Andrew Weil. Dr. Herscher is the Director of the Integrative Oncology Program at the Shady Grove Adventist Aquilino Cancer Center. She is committed to excellence in patient care and seeks to empower patients to make lifestyle changes that can have a lasting positive impact.

Dr. Kevin Passero and his special guest Cheryl Burdette, ND, will discuss the far-reaching effects of stress on adrenal health.

Cheryl K. Burdette, ND, received her Doctor of Naturopathy degree from Bastyr University in 2001. She completed her residency at Cancer Treatment Centers of America and the Family Health and Wellness Center. She has lectured internationally, and believes that education is a critical component of empowering others on their journey to wellness. Dr. Burdette has been a member of Xymogen’s Medical Board of Advisors since 2009.

Dr. Kevin Passero will be discussing sleep disorders and natural approaches to insomnia.

Dr. Kevin Passero, N.D., a Doctor of Naturopathic Medicine has trained extensively with leading doctors in the field of natural medicine. In his practice, Dr. Passero focuses on restoring harmony to both the body and mind using advanced protocols that incorporate botanicals, homeopathy, vitamins, and nutrition.

Host Dr. Kevin Passero and his special guest Jackson Corley will be discussing the benefits of IncrediBraces for circulation and pain support.

In 2008, Dr. Jackson Corley, a certified chiropractor and extreme-sports enthusiast, was mountain biking in Upper Bidwell Park. He crashed and fell down a 15-foot ravine, herniating five discs and severely injuring his legs. In lieu of surgery, he invented special socks called Incredisocks and a back brace called the Incredibrace using materials that vastly improved blood and oxygen flow and relieved his pain. He’s since modified the Incredibrace to include wrist and knee braces. In less than two years on the market, his Incrediwear products are catching fire worldwide.

Dana Laake and her special guest Gwenn Herman will be discussing support for chronic pain sufferers and their families.

Gwenn Herman is a Maryland clinical social worker whose life was turned upside-down in 1995 by a car accident. Frustrated by the lack of awareness and understanding of chronic pain that she repeatedly confronted among medical professionals, Gwenn founded the Pain Connection, Chronic Pain Outreach Center in 1999 – a nonprofit center providing support groups, education and training.

Dr. Cheryl K. Burdette, ND is a member of the Board of Advisors for Xymogen. She is also president and education director of NutraTest Labs where she is involved in clinical trials of nutraceutical products and the development of functional testing profiles. This position gives her a unique perspective in evidence-based natural therapies.

Dean Morris is a 5th generation master herbalist. He grew up on herbs and has diverse experience in organic horticulture, the natural foods industry, and healthcare. As the Director of Technical Affairs for Nature’s Way, Dean enjoys sharing the benefits of the many products he helped launch. He also enjoys leading herb walk presentations, which he feels fortunate to provide both in the U.S. and abroad.